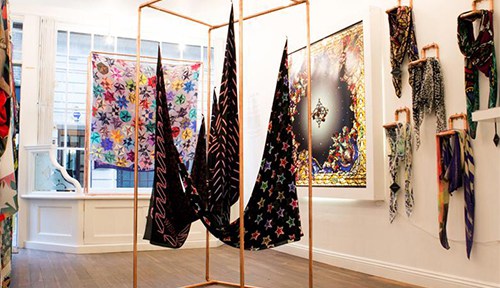 This weekend the team at Studio 104 had a very cultural weekend!

This year Studio 104 collaborated with Lisa on The Savoy’s uniform lining, which was inspired by the Thames Foyer’s history. The official launch of their new uniform is today, so expect to see some pictures from us very soon!

Lisa King’s stunning scarves are favored by the Pop Princess herself, Kylie.

The first was the Turner exhibition in Tate Britain. The extensive collection is enough to get lost in!

This Francis Bacon trilogy is extremely emotive and its very interesting that these paintings are inspired by photographs of Hitler and other leading Nazis. It is easy to leave an establishment such as Tate Britain with a handful of knowledge!

The next exhibition of interest is the Allen Jones retrospective shown at The Royal Academy. Allen’s use of colour in his paintings and sculptures are inspirational.

After all that culture it was nice to wander along Old Bond street, gazing at the Christmas decorations. Bond Street’s decorations were inspired by peacocks, and the whole street was adorned by golden feathers and fairy lights.

Christmas arrived in London a while ago, but being December 1st, its time to get into the seasonal spirit!

From all of us at Studio 104, Season’s Greetings!